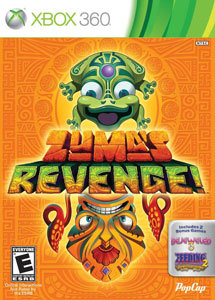 Experience new levels of ball-blasting action! Leap in and conquer
69 levels of Adventure mode. Discover four new Spirit Animals (at
least one of them is a monkey!) and harness their abilities to power
up your game. Dive in to the high-stakes Iron Frog mode: 10 levels,
one frog. Can you make it out alive? Battle all 8 tiki bosses in the
fast-paced Boss Rush. Enter the Weekly Challenge and compete for
high score on a new level every week.

Zuma’s Revenge! is a tile-matching puzzle video game developed and published by PopCap Games. It was released for Microsoft Windows and Mac OS X on September 15, 2009 as a sequel to the earlier Zuma, and was later ported to Windows Phone.

In the sequel to the original ball-blasting classic, shoot colored balls from your stone frog idol’s mouth to make sets of three, but don’t let the balls reach the …

This is NOT a dupe of Zuma.s.Revenge.XBLA.XBOX360-MoNGoLS! MoNGoLS’
release was the downloaded XBLA version for play only on JTAG/RGH
exploited Xbox 360s, while our release is the full retail DVD version
for play on DVD fw flashed 360s and ODDEs.