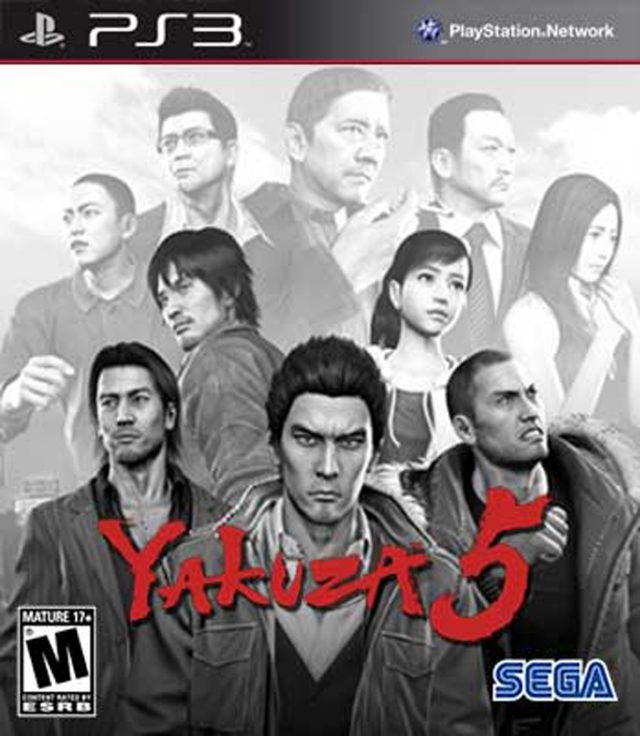 Yakuza 5 is an action-adventure video game developed and published by Sega for the PlayStation 3. The game is the fifth main entry in the Yakuza series. The game was released in December 2012 in Japan, and localized for North America, Europe and Australia as a PlayStation Network download in December 2015.The legendary dragon returns to the criminal underworld of Yakuza. Kazuma Kiryu, once known as the Dragon of Dojima, was living a quiet life as a taxi driver in Hakata after severing all his ties with the underworld.

The game play is relatively similar to previous games in the series, with a few changes. Similar to past games, game play is divided into two components being Adventure Mode and Combat Mode. Adventure Mode allows players to explore different areas and play sports across the city including mini-games and retro games such as Virtua Fighter 2 and Taiko No Tatsujin. The cities will also be significantly bigger than previous games, providing more areas to explore in the game and is said to feature the greatest volume of play spots across cities in the series’ history. The change between the game’s Adventure Mode and Combat Mode is also said to be more seamless than previous games, which involved a transitional change when encountering enemies whilst in adventure mode. Controls for the game have also been said to have been improved “dramatically” as with the tempo of the game’s combat mode.

For those people who’s still couldn’t make this game work:

1. Download the game, and the fix.
2. Extract it using winrar and pkgviewer (Download – Mirror) (Don’t change the name of the folder ex: NPUB31658) don’t extract the pkg fix.
3. Copy the extracted folder and the pkg fix on the root of your External HDD
4. Connect it to your PS3 and go to Multiman then File Manager.
5. Copy the game folder from “devusb000” (or something like that) to “devhdd0/game”
6. Copying the folder to devhdd might take time, (about 30-40mins)
7. After that, go to your XMB then choose install package file, and install the pkg fix.
8. After installing it, the Yakuza 5 icon will appear in the XMB and you’ll be able to play it without a problem.

This is how I got it to work after having trophy error.

1 – Copy all extracted files to the folder containing rejoin_splitted_pkg_in_one [Yakuza 5].bat then I run it. After you will have a 23gb file called NPUB31658_YAKUZA_5.pkg.
2 – Copy that file to the root of your external HD.
3 – Go to multiman and select PFS Driver under settings.
4 – Go to your External HD in the multiman file browser usb000 or something like that. Then click on NPUB31658_YAKUZA_5.pkg to install (It will be stuck on verifying data for like 15 minutes but don’t turn it off it will work) After the wait you will be taken back to the xmb. Go to Package manager and navigate to the standard directory and you will see NPUB31658_YAKUZA_5.pkg install it (It will take forever)
5 – Install the NPUB31658_YAKUZA_5_FIX_421.pkg
6 – Finally play the game