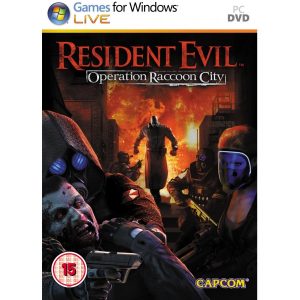 Resident Evil: Operation Raccoon City is a third-person shooter survival horror video game for Microsoft Windows, PlayStation 3 and Xbox 360, co-developed by Slant Six Games and Capcom. It was released on March 20, 2012 in North America, March 22, 2012 in Australia, March 23, 2012 in Europe and April 26, 2012 in Japan.

It is an installment in the Resident Evil series, being set around the same time as Resident Evil 2 and Resident Evil 3: Nemesis, and featuring the characters from these two games, though it is a non-canon hypothetical scenario.[2] The game follows a group of elite paramilitary mercenaries for the Umbrella Corporation during the zombie outbreak in Raccoon City. The game met with a mixed critical reception, but was a commercial success, selling more than 3.2 million units.

There are 12 playable characters in the game, with six characters for each side. On the Umbrella Security Service team there is: Vector (Andrew Kishino), the team’s recon expert and is equipped with a cloaking ability; Lupo (Nika Futterman), who is the team leader; Beltway (Ramon Fernandez), who is proficient in the use of explosives; Spectre (David Cooley), the marksman; Bertha (Lydia Look), the medic; Four Eyes (Gwendoline Yeo), the scientist, with the ability to program the bio-organic weapons (BOWs) and on the United States Special Ops team, Dee-Ay (Robin Atkin Downes) is the team leader; Willow (Rebecca Riedy) is the recon expert; Tweed (Tess Masters) is the demolitions expert; Harley (Gregg Berger) is the medic; Shona (Imari Williams) is the field scientist; and Party Girl (Catherine Taber) is the sniper.