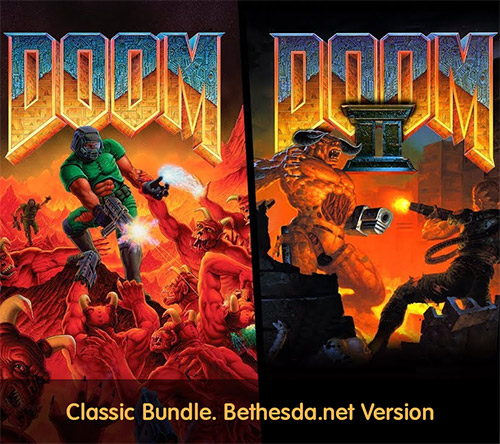 The Doom Classic port is a series of official ports of Doom and Doom II initially developed by Nerve Software in cooperation with id Software and first published by Bethesda on July 26, 2019 as part of the “Year of Doom” promotional campaign. It was initially announced on stage during the QuakeCon 2019 (DoomCon) keynote presentation. The port is based on the Doom Classic codebase, but replaces the id Tech 4 shell with one based on the Unity game engine.

No Rest for The Living Add-on

60 FPS Support: For the first time, DOOM and DOOM II now run at 60 FPS on all platforms, instead of 35 FPS as in the original releases.

Added Aspect Ratio Option: Stretches the display vertically to match the original 4:3 aspect ratio that the game was intended to be played in.

Added Quick Save and Load: Pause the game, and press R/R1/RB to immediately save where you are, and unpause the game. Load your quick save by pausing the game and then pressing L/L1/LB.

Added Level Select: Pick an episode, map, and difficulty of your choosing, and immediately play on it without having to clear the previous levels first.

Added Weapon Carousel: You no longer need to cycle through every weapon to get to the one you want. Press Previous or Next Weapon to highlight the weapon you want, and it will swap immediately to the selected gun.

Added Quick Weapon Select: The Directional Pad can now be used to quickly swap between weapons.

Up: Shotgun and Super Shotgun

Added Random SFX Pitch Toggle: Turn off randomized sound pitches during playback, which was a feature present in early versions of the original DOOM release.

New split screen HUD: A minimal HUD will be used when playing split screen multiplayer. The bottom status bar is removed, allowing more room for the game to be displayed in.